NeighborWorks® Pocatello held its annual meeting and awards ceremony this past October 23 at Westside Players Warehouse at 1009 S. 2nd Avenue.  The event was an opportunity to recap many accomplishments and to recognize dedicated volunteers and community partners.  The event was sponsored by the Bank of Idaho.

The evening began with a social hour where guests were treated to complementary appetizers from PV’s Uncorked on Main Street with entertainment provided by local guitarist, Scott Balsai.  Attendees were provided with the 2018 annual report which focused on the organization’s major accomplishments over the past 25 years.  Many attendees took part in the Silent Auction which featured prizes and gift baskets donated by individuals and local area businesses.    A total of $2,600 was raised from the silent auction with proceeds given to the organization’s six targeted neighborhood associations.

Emcee for the evening was Robert Richway, NeighborWorks® Pocatello Board President.    Keynote speaker was Mari Tusch, Immediate Past President, who described the top ten reasons why she supports NeighborWorks Pocatello.  Amongst the reasons were that NeighborWorks Pocatello is a significant player in the local economy.  Tusch shared results of a recent study showing new homes that NeighborWorks Pocatello constructed over its tenure have added $14.3 million of value to the tax base, which translates into over $189,000 per year in annual property tax payments.  She also said she was proud to support an organization that prides itself on giving people a “hand-up” rather than a handout.

Lacey Murdock, who is a recent purchaser of a NeighborWorks Pocatello home was a guest speaker.  Murdock emphasized the joys that she and her family have felt since owning a home.  Prior to becoming home owners, the family lived in an older mobile home that was in constant need of repair with very high utility bills.  She explained that she has struggled with a chronic autoimmune disease over the past several years and said important things like not having to battle with her landlord over every repair, having significantly lower utility bills and doing what she wants to do with the home now has cut down her stress levels in a significant way and feels her health has taken a turn for the better.

As is standard procedure at the Annual Meeting, board elections were held.  Rich Garvin, resident of the Neighborhoods of Historic Old Town was reelected for a new three-year term.  Mari Tusch, who is a designated community sector representative and Dale Reavis, designated business sector representative from A&E Engineering were also reelected for new-three year teams.

Several annual awards were presented.  Arlene Evans, Manager of Pioneer Title Company, received the Dick Emerson Volunteer Service Award.  Evans is a long-standing member of two NeighborWorks Pocatello Committees, including the Loan Committee (where she has served for over 20 years) and the Resource Development Committee (where she has served for 9 years) and is a consistent financial contributor to the organization.  Each June, during National NeighborWorks Week, she assists with flower plantings for the Pay-it-Forward BBQ at Caldwell Park.  Her company has also sponsored NeighborWorks Pocatello at the Chamber of Commerce Membership Luncheon for speaking engagements over the last 5 years.  Evans was commended for “always being there” when assistance was needed.

Alfreda Vann was recipient of the Rich Garvin Resident Leadership Award.  Vann is currently a Board Member for NeighborWorks® Pocatello and serves as chair of the organization’s Community and Government Relations Committee. She is a tenured member of the Bonneville Neighborhood Association where she has served in various capacities including association president and secretary. Her involvement in the Bonneville Neighborhood has assisted her in taking on important issues.  Several years ago, when the Federal Courthouse was looking to build in the footprint of Optimist Park, she was part of the citizen’s committee that helped save the park.  She was also part of an advocacy group that fought to save Bonneville School.  Although the efforts to save the school were to no avail, she and her fellow residents made their opinions well known.  Other leadership achievements include participation in the initial committee that helped form Pocatello’s Senior Center along with several years serving on the Board of Directors for Connections Credit Union.

Hannah Sanger, resident of the College Neighborhood and Science and Environment Engineer for the City of Pocatello, received the President’s Award primarily for her efforts in improving the Portneuf River and helping create a new vison for the Terry/1st Street corridor.   Each of these projects are potentially significant anchors for improving Pocatello’s central neighborhoods.  She has coordinated several cleanups of the river to make it more free of debris and floatable for canoeists.  The Terry/1st Project aims to create streetscape design concepts and would connect the ISU Campus to the Warehouse District and Old Town Pocatello.  Sanger has a knack for skillfully bringing together agencies, civic groups, business persons, residents and government to accomplish a common goal.  In the words of her nominator, her management style was described as “supreme team-builder extraordinaire,” and added that she is a “tireless advocate for making the Portneuf River part of our community again.”

Idaho Central Credit Union was recognized as Business Partner of the Year.  Ed Tierney, Chief Lending Officer and Crystal Iverson, Mortgage Loan Officer (both long-time members of the Loan Committee) were on hand to accept the award.  Over the past several years, ICCU employees have served as active committee members and helped landscape several homes NeighborWorks Pocatello has constructed.  For the past five years, it jump-started the organization’s annual Avenues for Hope Housing Challenge with sizeable lead donations.  ICCU also assisted NeighborWorks Pocatello with the purchase a large canopy for its new mobile block party trailer.  ICCU’s lending staff regularly refers many of its members to NeighborWorks Pocatello because they see the benefit of their customers taking advantage of home buyer education, down payment assistance and other NeighborWorks Pocatello services.

Over the summer months, twelve residents living in the central neighborhoods were recognized with Curb Appeal Awards for their outstanding efforts with landscaping of their properties.  Several of the winners were in attendance where they received award plaques.  Earlier in the year, all twelve winners were recognized with a $25 gift card from Pinehurst Floral & Greenhouse and award signs for display in their front yards.

The Annual meeting concluded with the drawing of some door prizes, as well as the final Spruce up the Neighborhood raffle drawing.  The winner of the raffle was Alfreda Vann, who won a $500 gift card from Lowe’s.  The raffle prize was co-sponsored by Idaho Power and Lowe’s with Mark Lupo of Idaho Power drawing the winning ticket.  All attendees as they left were given stainless steel tumblers imprinted with the NeighborWorks Pocatello logo with a 25-year anniversary message.

NeighborWorks® Pocatello is governed by a 13-member Board of Directors and has a staff of nine.  Its mission is a progressive alliance between residents, business and government that revitalizes targeted areas by empowering people, creating safe, healthy neighborhoods, providing opportunities for affordable, stable housing and building community pride.” 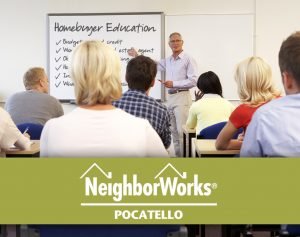 Do you want to buy a home, but don't know where to start? You don't have to feel alone. NeighborWorks Pocatello is pleased to offer residents of Southeast Idaho the "Finally Home!" homebuyer education class. Developed by Idaho Housing and Finance Association, the course offers participants an objective and detailed presentation of all the … END_OF_DOCUMENT_TOKEN_TO_BE_REPLACED