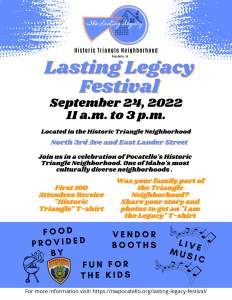 This year the Bonneville Neighborhood Association, in partnership with NeighborWorks Pocatello, applied for and received a Project Neighborly Grant from the Idaho Community Foundation. The grant will be to provide funds to hold a community event on September 24, 2022, to be held on 3rd and Lander in Pocatello. The event will bring back to the forefront the knowledge and stories of the Historic Triangle Neighborhood. The Triangle Neighborhood began with the coming of the railroad. Pocatello grew up alongside the Oregon Short Line Railroad, as the Union Pacific built this line to Oregon through the Portneuf Valley in 1882. The industrial origins of the city shaped the demographic spectrum of Pocatello’s population. As a result, Pocatello’s population was the most diverse of any city in Idaho. (Thompson Purce, Idaho. The “Triangle”: A Slice of America. Dec. 2005)

The Triangle represented not only a wide variety of ethnic groups and businesses living and working together, but from its origins at the turn of the century to its demise as a cohesive neighborhood in the decades following World War II the neighborhood reflected a unique time period in American life when such working class, ethnic communities thrived throughout the country. For many decades, a vibrant, healthy, and diverse group of people lived and flourished in the shadow of the Bannock Flour Mill (the current General Mills grain elevator on Pocatello Avenue). Families from a variety of ethnic groups and nationalities–African Americans, Italians, Japanese, Chinese, Greeks, Mexicans, French, and Germans- moved into the Triangle beginning in the late-1800s. Trapped there by the confines of poverty and racial discrimination, they developed a thriving community, each with their own business and social institutions. (Thompson Purce, Idaho. The “Triangle”: A Slice of America. Dec. 2005)

The September event hopes to bring the community together to celebrate the rich and diverse history that was part of Pocatello, specifically the Triangle Neighborhood. The attendees will be able to listen to music, visit vendor booths and partake in food cooked up by the Pocatello Police Department. 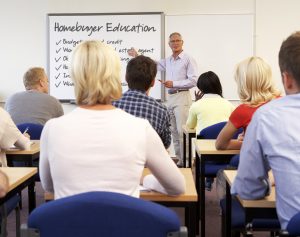 Homebuyer Education Do you want to buy a home, but don't know where to start? You don't have to feel alone. NeighborWorks Pocatello is pleased to offer residents of Southeast Idaho the "Finally Home!" homebuyer education class. Developed by Idaho Housing and Finance Association, the course offers participants an objective and detailed presentation … END_OF_DOCUMENT_TOKEN_TO_BE_REPLACED